blog, the algarve, Things To Do, Travel Tips

Hidden gems to visit in the Algarve

The Algarve is a well-known and incredibly popular holiday destination for tourists – especially during the summer. The southernmost region of mainland Portugal, this relatively small area attracts almost 10 million people each year. But while many travellers will have heard of famous beaches and towns like Lagos, some of the best places to explore are the ones a little further from the beaten track.

Here are four hidden gems to visit in the Algarve.

Above the sun-soaked beaches of the Algarve is an entirely different but equally stunning landscape. Lush and green, the area also features a mountain range that separates it from its neighbouring region of Alentejo. A hidden gem here is Monchique: a picturesque hamlet with stunning views over the coast below, perfect for hiking, relaxing, eating and drinking, and experiencing local Portuguese culture. Be sure to make a stop at Caldas de Monchique, where the Algarve’s only natural springs have been spouting healing 32ºC waters since Roman times.

Travellers who land in the southern city of Faro are inclined to head West along the coast, heeding the call of golden beaches and surfable waves. However, they often miss out on another natural wonder that sits to the opposite side of the city: Ria Formosa. A coastal lagoon formed by a system of inlets, peninsulas, and barrier-islands, the landscape here changes continually due to shifting winds and tides. Ferry rides shuttle visitors to some deserted, largely untouched and uninhabited sand islands. Mudflats and marshes brim with wildlife in an area which has been designated a protected Natural Park. Birdwatchers can spot winged beauties like Oystercatchers, Cranes, Egrets and Flamingos fishing in the shallow blue waters. It may not be the beach resort life that people come here expecting, but Ria Formosa is a pleasant surprise and definitely worth exploring.

While you’re visiting Ria Formosa skip across to Tavira, a small city which sits some 28 kilometres East of Faro. Often called the Algarve’s prettiest town, Tavira is blissfully old-worldly, and its layers of history are palpable. Why? Because the city dates all the way back to the late Bronze Age, before becoming one of the first Phoenician settlements in the Iberian West in the 8th century BC. It was destroyed, rebuilt, taken over by the Romans and then the Moors, reconquered by the Portuguese in 1242, and destroyed again in the earthquake of 1755. Its rich history leads it to having a pastiche of cultural and architectural influences, and it’s sometimes fondly referred to the “Venice of Portugal” due to its picturesque waterways and bridges.

Capped by an imposing red-brick Moorish castle and embraced by the remains of a city wall, Silves immediately asserts itself as one-time city of tactical significance. These days it does more sleeping than it does defending, however, easing along at a village pace that makes even the most hurried of tourists slow down and catch their breath. Silves is the sort of town that hasn’t been ruined by modern development – so it’s a perfect place to go to admire the hilltop views, wander the winding streets, and experience the relaxed pace of rural Portuguese life. 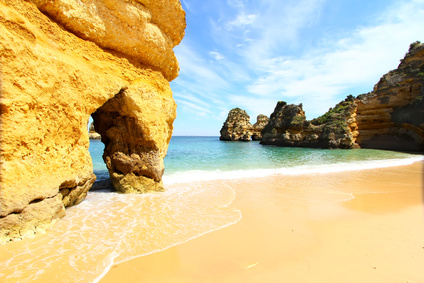