The unique architecture of Sintra, Portugal 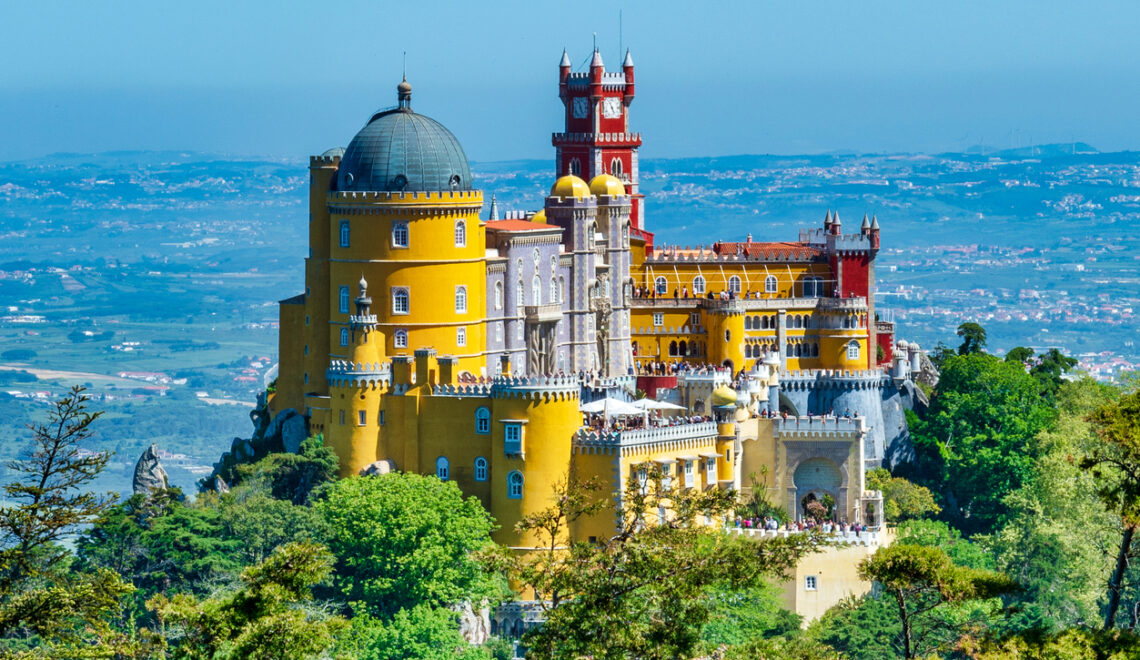 Sintra is unusual not just for its beauty, but for its high concentration of incredible monuments. Stand atop the sturdy stone ramparts of the ancient Moorish Castle and you’ll catch a view of the colourful Pena Palace; climb a tower at Quinta da Regaleira and catch a view of the Moorish Castle; and so on. But what makes all these sites — so numerous and so close together — even more interesting is their array of architectural styles and eras. Each of Sintra’s castles and palaces is unique in style. And just imagine this: between them they span over 1,000 years of history!

Castle of the Moors

Sintra’s oldest monument dates all the way back to the 8th and 9th centuries, during the time that the Iberian peninsula was under Muslim rule. The North African Moors built the castle on its strategic mountaintop position where its parapets allowed sweeping panoramic views of the surrounding lands. The castle’s architecture is reflective of both the era it was built and its purpose: it’s not decorative or ornate, but sturdy and functional. Don’t let that deter you from visiting, though, since the castle definitely has a rugged beauty to its snaking stone walls as well as an echo of ancient history lingering in the air. On top of all that, there’s also the stunning views.

Convent of the Capuchos

Fast forward to the 16th century, when the Convent of the Capuchos (in Portuguese the Convento dos Capuchos) was founded amidst the verdant forests of Sintra. Built in the medieval style, the convent’s structures are small, simple, and scarce. The beauty of the architecture is that it was designed to be in harmony with its surroundings. Huge granite boulders that scattered the landscape were incorporated into buildings allowing them to blend with the nature around them; Portuguese cork was used to line doors and windows. The austerity of the rooms and lack of decoration reflects the lifestyle and philosophy of the Capuchin monks who lived in them: they renounced earthly pleasures and superficial pursuits in their quest for spiritual enlightenment.

With its unusual melting pot of colourful styles, Pena Palace is considered to be one of the most important examples of 19th-century Romanticism in the world. The palace was built as a summer residence for the Portuguese royal family and sits atop Sintra’s second highest peak, with incredible views all around (to find out the highest peak, read about Sintra’s hidden gems). The Romantic era saw all things exotic come into fashion, hence the deliberate eclecticism of the architecture of the palace: you can spot Neo-Gothic, Neo-Manueline, Neo-Islamic and Neo-Renaissance references within its grounds. Moorish arches sit alongside Manueline oceanic motifs, Gothic-inspired spires atop allegorical motifs. Singling out all the different elements is quite a task — but the one certain thing is that together they make for a magical sight.

Intriguing, enigmatic, and undeniably breathtaking, Quinta da Regaleira is a Sintra estate well worth visiting. The facade of the main palace is festooned with Gothic pinnacles and stone gargoyles. Manueline symbols recalling the Portuguese discoveries era are etched into towers. Other architectural elements borrow from the Renaissance or even Ancient Rome. This eclectic construction is relatively modern, having been started in 1904 and completed in 1910, so you can even catch a hint of Art Nouveau curves creeping into its decorative tiles and stoneworks. The unique and eclectic architecture of Quinta da Regaleira spans all throughout the gardens of the estate, with numerous buildings — like a Catholic chapel and the famous initiation well — all presenting beautiful examples of their own. To really make your tour of Quinta da Regaleira interesting, try to keep an eye out for both the different architectural styles and the huge trail of mysterious symbolisms and esoteric motifs.

The unique architecture of Sintra
by Joe